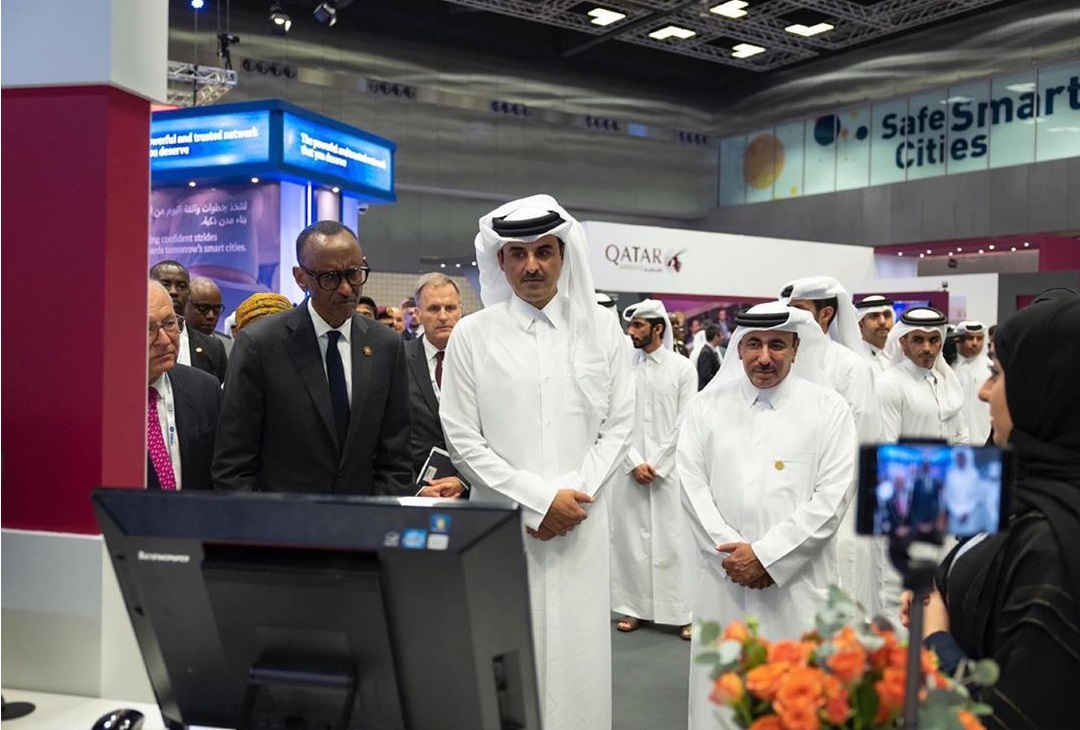 29 October 2019, Doha, Qatar: His Highness the Amir Sheikh Tamim bin Hamad Al Thani attended the opening of the Qatar Information Technology Conference and Exhibition (QITCOM 2019), organized by the Ministry of Transport and Communications under the theme "Safe and Smart Cities", and the Munich Security Conference (MSC) Core Group Meeting at the Qatar National Convention Centre in Doha on Tuesday.

The ceremony was attended by His Excellency President Paul Kagame, President of the Republic of Rwanda, His Excellency Sheikh Abdullah bin Nasser bin Khalifa Al Thani, Prime Minister and Minister of Interior, and a number of his excellency sheikhs and ministers.

The opening was also attended by His Excellency Mr. Yusuf bin Alawi bin Abdullah, Minister of Foreign Affairs of the Sultanate of Oman, His Excellency Dr. Mohammad Javad Zarif, Minister of Foreign Affairs of the Islamic Republic of Iran, His Excellency Mr. Nijervan Barzani, President of the Kurdistan Region of Iraq, and a number of his excellencies. Ministers of  Information, Communications and Information Technology from brotherly and friendly countries, Heads of Diplomatic Missions accredited to the State of Qatar, senior officials, experts, board presidents and executives in the field of communications and information technology.

The ceremony began with the screening of a film that tells the story of the development of the digital transformation in Qatar, and His Excellency Mr. Jassim bin Saif Al Sulaiti, the Minister of Transport and Communications, and H.E. Wolfgang Ischinger, Chairman of the Munich Security Conference, delivered a speech on the occasion of the opening ceremony.

Speaking at the opening ceremony, His Excellency Jassim bin Saif Al Sulaiti, Minister of Transport and Communications Said: “The Emir’s patronage of QITCOM 2019, held under the theme “Safe Smart Cities”, shows that Qatar’s wise leadership is keen to support the digital transformation of the country, create an integrated digital society, and prepare the human capital to participate in the building of a knowledge-based economy. This would keep Qatar up to date with the digital boom the world is witnessing and help advance economic development.”

The minister said Qatar was one of the first countries to realize the benefits of smart cities and their importance for the comprehensive and sustainable development the country is working to achieve. He said Qatar augmented its ITC infrastructure and improved the internet quality, becoming the first country in the world to launch 5G services. He noted that government ministries and agencies began using technologies and systems that better the quality of services they offer to the public, improve the lifestyle of individuals, support scientific research and innovation in the digital industry, and offer more financial, technical, and logistical support for entrepreneurs and startups in the digital sector through various initiatives such as the Digital Incubation Center.

His Excellency said that in continuation of these efforts and initiatives, and as part of the Qatari Government’s endeavors to accelerate the achievement of all the pillars of Qatar National Vision 2030 and the comprehensive and sustainable development goals, the Smart Qatar program “Tasmu” was launched, noting that the program will pump massive investments to develop the digital infrastructure in the country. He said the Qatar National Artificial Intelligence Strategy was also finalized in cooperation with Qatar Computing Research Institute and with participation of a number of top experts in international universities. He said the strategy is aimed at using artificial intelligence to secure Qatar’s economic and strategic future as desired by Qatar National Vision 2030.

His Excellency said that Qatar has already started to reap the fruits of smart city technologies on various levels and across various sectors, noting that these technologies helped develop the traffic system and contributed to the development of the healthcare sector and the education sector, with the latter ranking first on the Arab level and fifth on the global level. He said the country’s main ports, such as Hamad Port and Hamad International Airport, were also equipped with state-of-the-art smart solutions and technologies.

The minister said the MoTC cooperated with partners in the government and the private sector to promote QITCOM as an ideal platform to exchange expertise, discuss ideas, provide insights, review new trends in the digital world, and develop smart solutions that can address the regional challenges in general and the challenges that Qatar is facing in particular.

He noted that QITCOM, which is now a key element in MoTC’s digital strategy, continuously developed over the past editions, with the current edition seeing partnership with Fira Barcelona, the organizer of the international Smart City Expo World Congress, to organize the first edition of Smart City Expo Doha 2019 on 29 and 30 October, in which 71 speakers from 23 countries will participate to discuss entrepreneurship, artificial intelligence, cyber security, and urban planning.

He noted that in tandem with QITCOM 2019, Doha is hosting the MSC Core Group meeting to discuss regional and global security issues and raise awareness of cyber security and its implications. This, he said, is in line with Qatar’s efforts to enhance its regional and international cooperation to create a safe and strong cyber ecosystem.

Concluding his speech, the Minister of Transport and Communications thanked His Highness Sheikh Tamim bin Hamad Al-Thani, the Emir of Qatar, for his kind patronage of the event. He also thanked the international delegations, speakers, sponsors, exhibitors, entrepreneurs, and innovators participating in this year’s QITCOM edition, noting their role in enriching the event and their constant support for Qatar’s plans to develop the concept of smart cities and move toward an advanced and sustainable digital future.

For his part, His Excellency Wolfgang Ischinger, Munich Security Conference Chairman, said: “I am honored to attend the opening of QITCOM 2019 to discuss the digitization challenge from the perspective of the MSC. We are pleased to be here today in one of the leading events in the Middle East and to organize a roundtable on cyber security in cooperation with the Ministry of Transport and Communications under the headline “securing digitization in the Middle East” to discuss cyberspace governance, in addition to the challenges and experiences in the Gulf region in particular. This would help us learn lessons for future events, such as the cyber security summit that will be held in Berlin after one month on the sidelines of the UN Internet Governance Forum. We hope to see new ideas in the next two days on how to advance digitization and improve governance and international cooperation, and on how to do this in a safe and trustworthy manner.”

QITCOM 2019 is different from previous editions in that it is a world-level edition featuring 104 speakers from around 30 countries, more than 400 local and international exhibitors, around 300 innovators and entrepreneurs, and 29 local and international sponsors. More than 60 countries from the region and beyond are participating in the various QITCOM activities. The United Kingdom, the United States, Armenia, Jordan, Rwanda, Italy, and Oman have pavilions in the exhibition, while 11 high-level ministerial delegations from Iraq, Somalia, Cote d’Avoire, Rwanda, Iran, Armenia, Bulgaria, Ghana, Gambia, Romania, and Oman are participating in the conference.

Around 276 local private companies and government establishments, including 50 startups, are participating in the exhibition. The MoTC has a special pavilion in which the ministry and all its affiliate sectors showcase projects and programs on smart transformation at the various government sectors. Another pavilion for Qatar E-government showcases projects by all ministries and government bodies featured in the Qatar e-government program. There is also a dedicated entrepreneurship zone bringing together 100 local and international startups, more than 300 innovators, and more than 55 speakers. Through this zone, the MoTC will offer finance and business incubation opportunities through five main platforms for the various digital sectors; namely, Make the Deal, Idea Camp, Code Camp, Startup Hub, and Innovation Theatre.

QITCOM 2019 is expected to showcase many investment opportunities in the Qatari market and announce about 200 initiatives, digital systems, trade partnerships, and agreements with companies and local, regional, and international parties, all aimed at supporting the plans to build an innovative and sustainable digital society in Qatar.

The MoTC launched a dedicated QITCOM Android- and IOS-based smartphone app, a smart platform to facilitate communication between exhibitors and visitors. The app will provide full information about the sessions and activities in the conference and exhibition, their times, and direct streaming of events. QITCOM 2019 is expected to attract about 30,000 visitors.

Participants in QITCOM 2019 will be able to access a B2B matchmaking platform, one of the key initiatives of the fifth edition, through QITCOM smartphone app or through mediators who can help arrange joint meetings between companies and investors. The platform is expected to feature more than 300 business owners from different parts of the world, who can network, exchange knowledge, and raise innovative ideas. The platform seeks to bring together and coordinate between more than 500 companies, government bodies, SME’s, entrepreneurs, and technology solution providers on the one hand and potential investors on the other.